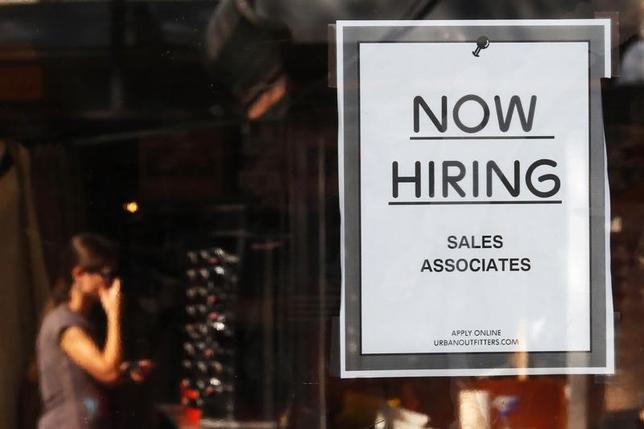 A ”Now Hiring” sign hangs on the door to the Urban Outfitters store at Quincy Market in Boston, Massachusetts
Reuters/Brian Snyder

U.S. small businesses stepped up hiring in January after taking a pause in December and many continued to point to difficulty finding qualified workers, a survey showed on Thursday.

The monthly survey of the National Federation of Independent Business showed that 52 percent of respondents said they were hiring or trying to hire, but a large share of those reported few or no qualified applicants for the jobs they were trying to fill.

The percent of owners citing the difficulty finding qualified workers as their top problem held at 15 percent, the highest reading since 2007.

The average employment gain per firm was 0.11 workers compared with -0.7 workers in December.

In the survey, 29 percent of owners reported jobs openings they could not fill, up one point from the prior survey and the highest level for the economic expansion.

“This is a solid reading historically and is suggestive of a reduction in the unemployment rate”, Dunkelberg said.

Growth in the United States slowed in the fourth quarter of last year and data so far in 2016 has shown that weakening global growth, a strong dollar and slumping oil prices continue to take a toll.

But employment has been a bright spot. Jobs data to be released on Friday by the Labor Department is expected to show non-farm payrolls grew by 190,000 in January, less than the robust 292,000 created in December but consistent with a strong jobs market.