The Truth About Retirement for Baby Boomers

The Truth About Retirement for Baby Boomers

One of the biggest changes in the U.S. labor market over the past two decades has been the increasing number of people working over the age of 55. From the end of World War II until the early 1990s, a smaller and smaller share remained in the labor force but since the 1990s that trend reversed.

In 1993, only 29% of people that age were in the labor force. The vast majority were retired. But participation has been rising and by 2012 more than 41% of that age group were still in the labor force, the highest since the early 1960s. 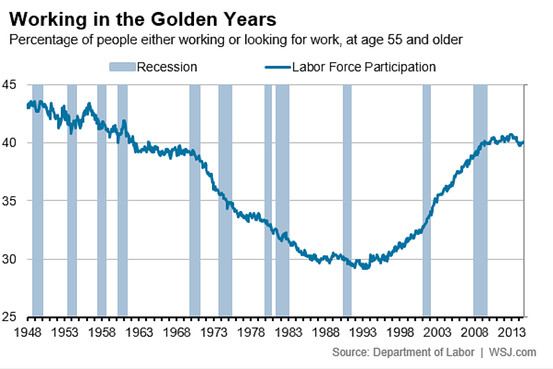 Clearly, something has changed about people’s attitudes toward retirement. A survey from the Federal Reserve last week provided some clues. Around 21% of people said their plan for retirement is simply “to work as long as possible” and the number of people giving this response increases by age.

Conversely, the traditional way to retire – working full-time in a career until ceasing work altogether – is the plan for 35% of people in their 20s. But by the time they reach their 60s, only 15% say it will be their route.

For at least some Americans, the rise in labor force participation at old age signals that retirement is simply out of reach. Surveys from Gallup have found that people who believe they can afford to retire generally tend to do so the earliest. The wealthy businessmen or distinguished town doctors who are in good health and just enjoy their work too much to ever step aside are the exception, not the rule.

The rising participation of the old is an exception to the overall trends in the U.S. labor force. For the past decade, labor force participation has declined in the U.S, and much of the decline has been attributed to the retirement of the Baby Boomer generation: children born in the years after World War II began turning 55 in the year 2000.

This might sound like a paradox. How can the falling labor force be the result of aging, if old people are increasingly likely to work?

The Department of Labor has some little-seen data showing the participation rate by age that helps makes clear why these two trends are not necessarily a contradiction. 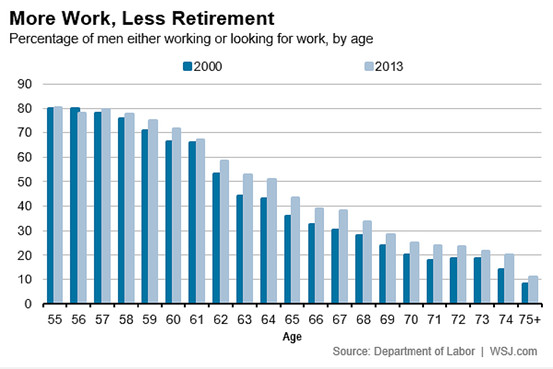 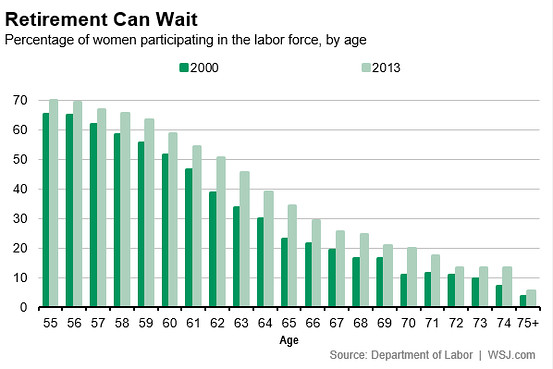 The trend is also true for women. At every age, women are more likely to work than they were just 13 years ago.

So both labor force trends are true. The massive Baby Boomer generation is moving through retirement and contributing to the decline in the national labor force participation rate, even though people are now working longer in old age. 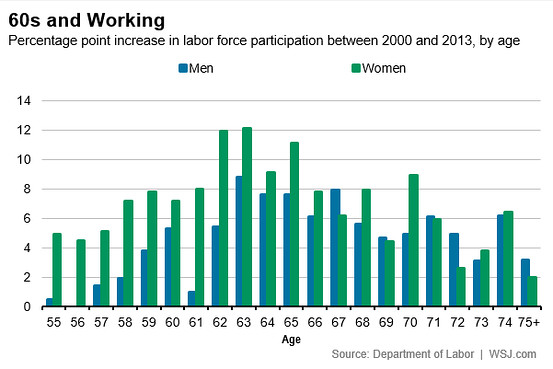 The change in labor force participation that has happened at each age has been biggest for workers in their mid-60s. From age 62 to 65, women are about 10-12 percentage points more likely to work today than in 2000, and men about 6-8 percentage points more likely. These are precisely the years when decisions to continue to work help optimize the size of Social Security payments and the years where some workers may choose to continue working until becoming eligible for Medicare.

Americans’ retirements have been delayed, but not abandoned entirely. Having the financial means to retire is a big part of the story. But the vast majority are still getting to their golden years eventually.