Job openings rose to their highest level in nearly 14 years at the end of November, the Labor Department said Tuesday.

Openings rose to a seasonally adjusted level of 4.97 million in November, their highest level since January 2001, according to the Labor Department’s monthly Job Openings and Labor Turnover Survey, known as Jolts. 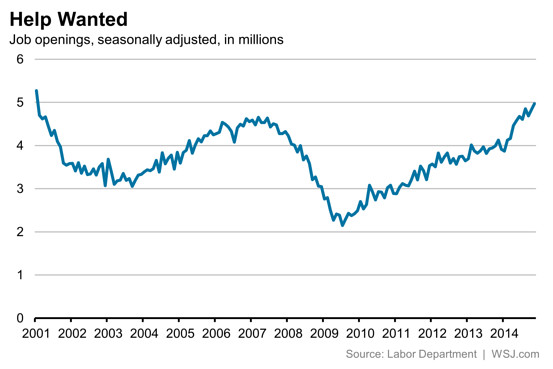 The number of openings rose 27% from a year earlier and stood 15% above the level from December 2007, when the last recession officially began. 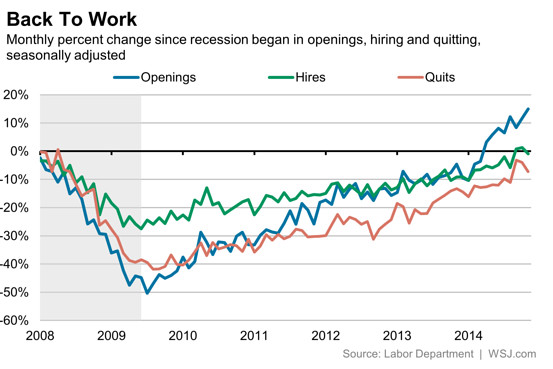 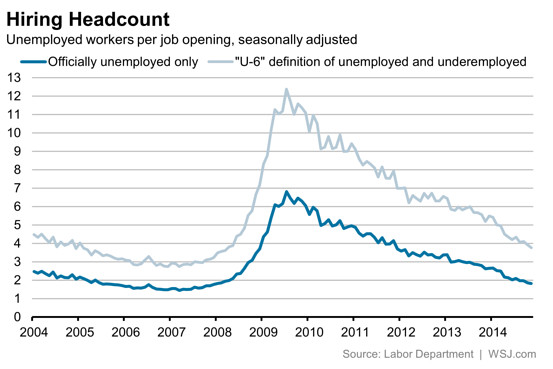 For months, economists have said that strong improvement in demand for workers should translate into higher wages. So far, it hasn’t.

“The increase in job openings is a favorable sign for upcoming payroll growth and perhaps a good sign for earnings growth,” said Daniel Silver, an economist at J.P. Morgan Chase & Co. Still, there hasn’t been a strong relationship between openings and wage gains in the current cycle, he said.

The report showed mixed improvement on other fronts. Hiring edged down in November after it advanced in October to a seven-year high. The 4.99 million hires in November rose 9% from a year earlier. Layoffs fell 8% from October. 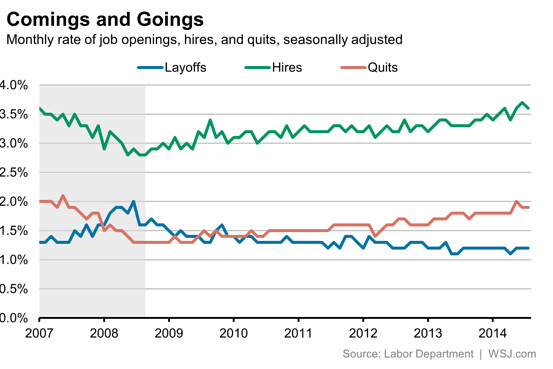 Tuesday’s report on labor turnover is separate from the monthly jobs report, which last week showed that employers added 252,000 jobs in December, bringing average monthly job growth to 246,000 in 2014, the most in 15 years. The unemployment rate fell to 5.6%.

The Jolts report is closely watched by the Federal Reserve for signs that labor market is improving. The report again highlighted how the relationship between openings and unemployment has been out of whack in the current economic recovery.

At the current rate of job openings, the prerecession trend would imply that the unemployment rate should stand below 4.5%. Some economists say that the relationship— tracked using a model known as the Beveridge Curve—has been disrupted by the severity of the 2008 crash, and that it will return to normal very slowly.

But others say that openings today can’t be filled by many of the workers who lost their jobs in the recession because they lack the skills to do the jobs employers need to fill.